Arthur’s Hill residents have until Valentine’s Day to order free personal recycling bins for their household.

Leaflets advising of the new scheme went out to all residents in January, in response to pressure from Greening Wingrove & Arthur’s Hill, says chair Nigel Todd, also a local city councillor.

Recycling in the area ‘collapsed’ in Wingrove and Arthur’s Hill after recycling provision was withdrawn, says Nigel.

The collapse follows the abolition of the traditional household green and blue weekly collection system and its replacement by so-called ‘communal bins’, which remain in back lanes all the time and do not prioritise recycling.

“We suggested to the City Council that they return blue recycling bins to households that wanted to recycle domestic waste. This was agreed, and the quality of recycling greatly improved. Greening Wingrove & Arthur’s Hill felt that there was scope to bring more residents in the terraces into the recycling scheme. The Council has now responded with an invitation to residents to apply for blue bins.”

Residents will be expected to keep the bins safe in a yard or garage, apart from on bin collection day.

The City Council is offering recycling bins to all households in Arthur’s Hill ward, but residents must register their details by Sunday 14 February to take advantage.

Residents should email their name and full postal address to keepitclean@newcastle.gov.uk or telephone 0191 278 7878 and ask for ‘Envirocall’. 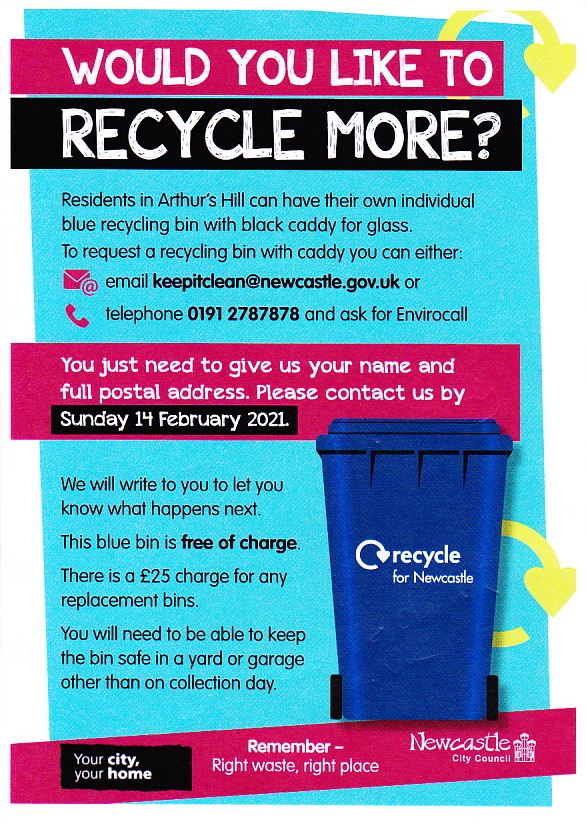 GWAH Calls For Meeting With Council

We are calling for more discussion with the Council about how we tackle waste issues in our neighbourhoods.

“We’ve been very concerned, to say the least, about the fly tipping, overflowing bins and mess in the back lanes of the terraced streets off Wingrove Road and in Arthur’s Hill’ says Nigel.

“For some time we’ve been seeking a further meeting with the City Council to find ways of reducing the problems. It’s now likely that the Council will host an on-line community meeting about litter and waste in early March, and chaired by the Leader of the Council (Arthur’s Hill councillor Nick Forbes). This will be primarily for residents of the terraces, but there are other ‘hotspots’ that could feature in the meeting.

“We’ll publish more details when these are available. But if you’d like to register an interest in attending and having your say, then do contact us: gw.bikegarden@gmail.com