The first version of this document included contemporary socio economic conditions relating to becoming a volunteer and we still live within an echo of Thatcherism. And I thought “hang on; why complicate matters”?  Who would even read that?  Other than me..

So I shall do a passage on the why’s, how’s and when’s of a personal voluntary experience.

Having bumped into an old friend in the street she informed me about work in our local park and the whole Greening Wingrove project.

“There space for volunteers” said she.

That was early 2015 and since then I’ve become quite involved.

Circumstances meant I was back in the Mothership of Newcastle and recently had a leg operation so I needed regular exercise, so I thought I’d see what was happening in Nuns Moor, perhaps I’d get to help plant some flowers and “pretty” the place up a little.

We all know green spaces are vital to a city and its residents, 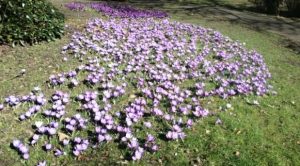 providing sanctuaries for habitat and indeed humans.
Furthermore the City actually uses parks and open spaces to offset their carbon allowance and reduce the fines they receive from Europe.  I’m off again…

But to maintain a park is an expense. Some of us remember the old Park Keeper jobs, their duty to look after local parks and ensure the spaces were safe and well-managed. These posts were scrapped in the 70’s (I think) in a cost cutting exercise still happening to this day.

But as a local resident and outdoor lover, I said I’d do a few hours when possible to “help out” and almost two years later, I’m still doing it and get a lot of enjoyment from this. Initially, being tasked to chop wood for the pizza oven, I was happy (and able) to assist. It’s not a job for everyone I know; but whatever your skills or abilities, there’s something for you.

So why volunteer? Is it the laughter, the experience, the new skills, the people-meeting, the copious quantities of free tea and biccies, the willow weaving, craft sessions, apple days, courses, fresh air, serenity, the food, the exercise, the wildlife, the environment? 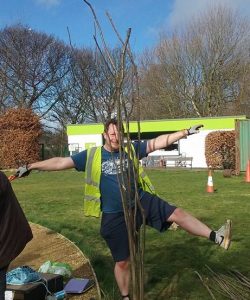 All of these and more. It’s becoming part of something which is fundamentally there to help our area and us residents. To provide a better quality of life for all, to preserve what we have for the next generation. As I say, it’s not for everyone but there’s no such thing as the ‘average ’volunteer.  We come from different backgrounds, some are in employment, some retired, some have just started and others more experienced. But all are community-minded and these are the kind of people needed in any society.  Thatcher said “Greed is good”. I have to disagree Maggie.

Also on offer is the Time Exchange on Stanton Street, where ‘jobs’ are swapped in hours not money.  If, for example, if you tidy someone’s garden, then the time bank will give you credits for the time taken. These hours can then be used in having domestic jobs done for you.

It’s worth getting involved for as little or as much as you like in any projects. I’m glad I have.